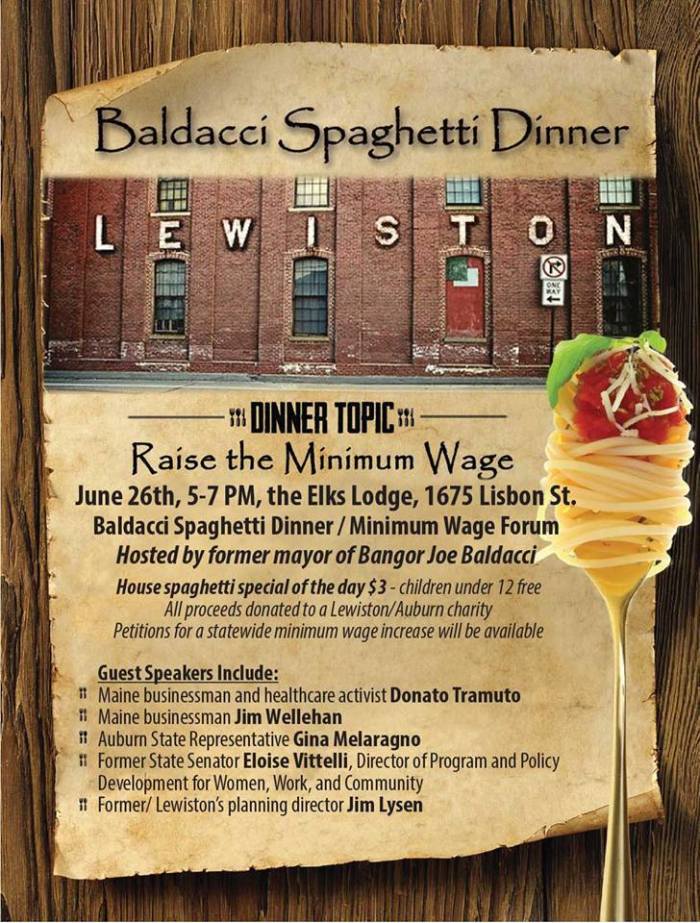 “These spaghetti dinners have always been a great opportunity to bring the community together for a family dinner that encourages discussion and unity on important working class issues,” said Bangor City Councilor Joe Baldacci.

Speakers will address the dire economic situation faced by low income Mainers and the need for local and state action to increase the minimum wage. According to the non-partisan Economic Policy Institute (EPI) the federal minimum wage of $7.25 is worth $2 less today than it was in 1968 when adjusted for inflation.

“Nobody working a 40 hour week should live in poverty,” said Councilor Baldacci.

State Rep. Gina Melargno will talk about her bill to raise the wage as well as other efforts lawmakers have made in Augusta towards this goal. “Maine workers find themselves working at least full time but still living in or near poverty, while having to care for their families at the same time,” said Rep. Melaragno, who submitted An Act To Raise the Minimum Wage and Index It to the National Average Wage. “They have seen the prices of everything go up except the price of their undervalued labor, and they are tired of being thrown a small token raise every five or six years. They want meaningful, lasting change.”

An Alliance for a Just Society estimates that $15.82 an hour would be a livable wage. Maine’s current minimum wage forces far too many families onto welfare rolls, and the need for federally subsidized healthcare.

“I have been in the health care industry for over 35 years and I have seen study after study that has verified that for those in the vulnerable wage bracket, their health outcomes are not as favorable as those who have the means to seek high quality healthcare. And that raises this issue of the minimum wage to more than an economic problem — it is also a health problem,” said Donato Tramuto.

According to the Massachusetts Institute of Technology’s local wage calculator, at today’s minimum wage a single mother in Maine would have to work 138 hours per week just to survive without government assistance programs like Medicaid and the SNAP (food stamps.)

Jim Lysen, former Lewiston Planning Director, will speak on how people can get involved with the Maine Peoples Alliance’s petition drive to steadily increase the minimum wage to $12. 00. Petitioners will be in attendance.

The EPI estimates that gradually increasing the wage to $12 per hour would give over 120,000 Maine workers—more than a fifth of the state’s workforce—a raise.

• 60 percent of the workers who would be affected are women.
• 85 percent are over the age of 20.
• 75 percent work in service, sales, and office and administrative support occupations.
• 75 percent work in: retail, education and health services, and leisure and hospitality.
• 40,000 children have at least one parent who would get a raise from this change.

In Lewiston-Auburn specifically, according to the Bureau of Labor Statistics, a minimum wage increase to $12 would give an immediate raise to over 25 percent of the workforce

“I hope this dinner, and other events that we lead across the state, will help generate a grassroots push for a statewide minimum wage increase,” said Councilor Baldacci.

Last February Bangor City Councilor Joe Baldacci proposed a local ordinance that would incrementally increase the minimum wage in the city, beginning with $8.25 per hour in 2016, to $9 per hour in 2017 and advancing to $9.75 in 2018.

This spaghetti dinner is part of a series that Councilor Baldacci will hosting across the state to generate support and awareness for raising the minimum wage as well as to give people information about the Maine Peoples Alliance’s minimum wage petition drive. There will be upcoming events in Bangor, Portland, Millinocket, and Presque Isle.

Joe Baldacci has already held a town forum in Bangor, and spoke on the issue in Waldo County, and Washington County.

All of the proceeds from this dinner will go to New Beginnings of Lewiston, a local nonprofit that helps 700 homeless young people and families in crisis work toward a brighter future every year.

“Changes in income directly impact the young people we serve and their ability to secure and maintain housing,” said New Beginnings Program Development Director Rachel Spencer-Reed. We are grateful that Joe is bringing this town hall event to Lewiston/Auburn. The proceeds from the dinner will be used to support the expansion of our Drop-In Center for homeless youth in Lewiston.”