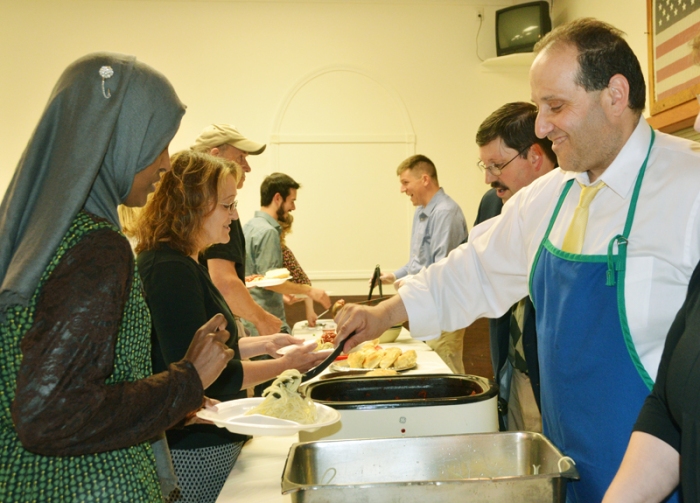 By Joe Baldacci, First appeared in the BDN
Posted Nov. 01, 2015, at 7:48 a.m.
The important debate over raising the minimum wage in Bangor most certainly will be affected by the decisions made by the voters on Tuesday, Nov. 3.

Tuesday’s election is not only for the future of Bangor but for the future of Bangor’s values and leadership throughout the region. We have been leaders and innovators throughout our city’s history. By electing the right candidates, we can show Augusta, Washington, D.C., and the rest of the state of Maine that providing a livable wage to our citizens not only is morally right but economically right as well.

There are many fine candidates running for Bangor City Council. They may bring a host of ideas and experiences to the job of councilperson. Of this group, Meg Shorette and Sarah Nichols are the only ones fully committed to the issue of raising wages for those who live and work in Bangor. END_OF_DOCUMENT_TOKEN_TO_BE_REPLACED

America’s minimum wage was raised to $7.25 per hour on July 24, 2009. It’s still there. Unlike almost all other federal benchmarks, the minimum wage is not updated for inflation.

The minimum wage reached its (inflation-adjusted) historic high in 1968, when it was raised from $1.40 to $1.60 per hour. Adjusted for inflation using the BLS online inflation calculator that would come to $10.55 per hour in 2012 dollars.
That $10.55 figure is the focus of a nationwide campaign organized by the National Employment Law Project (NELP). In today’s political climate it would certainly be a major accomplishment to achieve a $10.55 minimum wage. But $10.55 is still far too low. 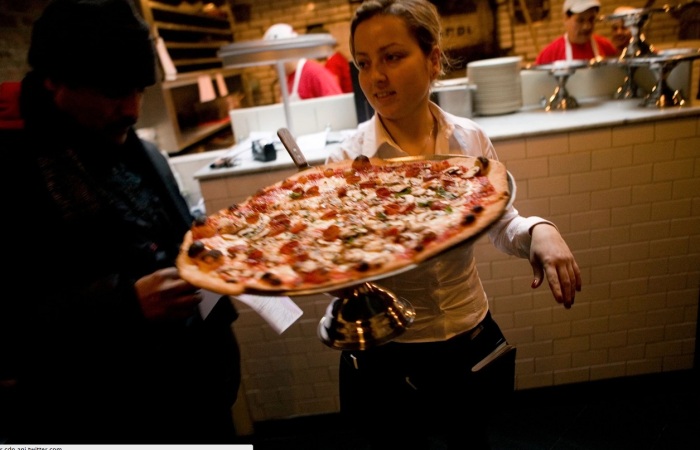 According to one study, up to 80% of waitresses have experienced sexual harassment on the job. Photograph: Ted Pink / Alamy/Alamy

Editorial by Annie Quandt, a server working in the Old Port and a resident of Westport Island. First appeared in the PPH

When you are sexually harassed in a restaurant yet depend on tips, it’s  harder to voice a protest. By now, everyone on social media has seen something about the New Jersey waitress who got an “LOL” as a tip on a $112 check last summer.

While I’ve never had someone completely stiff me because it took them a while to get their food – the customers’ rationale in the New Jersey incident, as they noted on the receipt – I frequently find myself putting up with almost anything from customers in order to get the tips that make up half of my income.

In Maine, 82 percent of all tipped restaurant workers are women, and any woman who has worked for tips will tell you that sexual harassment and rude comments are, sadly, just another part of the job.

When your customers pay your wages instead of your employer, you don’t have the luxury of speaking up when you feel uncomfortable or disrespected; if rent is due that week or you have a family to feed, you just have to put up with it.

I’ve been working at a restaurant on Commercial Street in Portland for just about a year now, and I just picked up a second serving job on Commercial Street to make ends meet. Recently, two men came in, clearly intoxicated, and sat at their table for an hour and a half trying to look up the waitresses’ skirts.

All of the women working that night could feel these men leering and were uncomfortable and anxious the whole shift. When we complained to management, they told us to cut off their alcohol consumption – but nothing else was done.

These types of incidents are commonplace in the restaurant industry. I have been asked out on dates, with the customer’s pen hovering over the tip line as he waited for my answer. I have been asked for my number more times than I can count. I have had customers comment on my outfit or my body while I’m working. I’ve wanted to say something, but the customer is always right … right?

When women servers can’t defend themselves from rude behavior from customers, the entire restaurant culture begins to accept it as the norm. Even management plays a role in harassment in this industry.

If you’re not “date ready” when you show up for your shift, in some restaurants, you’ll be told to change or unbutton your top or to put on more makeup to make yourself appealing. In my case, the managers have made it clear that the curvier girls are not allowed to wear certain clothing items, while the more slender servers can wear whatever they want to work.

Comments like this about body types and personal style not only make us all feel watched and uncomfortable but also sometimes make it more difficult for us to do our jobs. When I’m sweeping and cleaning and doing side work in 95-degree heat, the freedom to wear a skirt versus jeans is almost a necessity.

Where do you turn when the person who holds power over you at your job is the one harassing you? What happens if you do make a formal complaint? The restaurant industry is a tight-knit community, and if any employer thinks you might be a hassle, they won’t hire you.

Servers wield so little power in their positions and in their wages, and I am inclined to think that the two are inextricably linked.

According to a Restaurant Opportunities Centers United survey, servers working in states like Maine – where there is a sub-minimum wage for tipped workers – are three times more likely to experience harassment on the job than servers who work in states where everyone makes the same minimum wage.

This is evidence of a systemic problem – combined with the fact that, according to the Equal Employment Opportunity Commission, 7 percent of American women work in restaurants but 37 percent of all EEOC sexual harassment complaints come out of this industry. We’re allowing an entire industry full of hardworking women to go to work with the presumption that they will be harassed.

It would mean that management and our co-workers would have to respect us as equals (because when you are paid less, you must obviously be worth less). And it would mean a stable wage for the long winters and tough weekday shifts when servers are more willing to sacrifice dignity at work in order to make ends meet.

I deserve dignity on the job, and one fair minimum wage would help me get it.

While Baldacci is pushing his original proposal, which boosts Bangor wages sooner, he said Friday it is still possible the council will take up the compromise proposal after the election.

A proposal to increase wages for Bangor’s lowest-paid workers will likely live or die based on the results of the Nov. 3 City Council election, but a recent poll of candidates shows most oppose the idea.

The issue of a local minimum wage has loomed over the election since July when the council agreed to delay consideration of the proposed ordinance until Nov. 23.

Since then, the hotly contested political battle has attracted outside interest from statewide groups such as the Maine People’s Alliance, a liberal-leaning advocacy group, and the Maine Restaurant Association, a statewide organization that promotes the food industry. 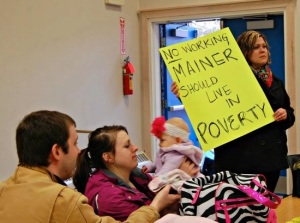 “What we did was preserve the opportunity for the new councilors to weigh in on this and see where it goes,” City Councilor Joe Baldacci said last week.

Baldacci first proposed the local minimum wage in February. But he was unable to secure enough support to pass the ordinance under the council’s existing membership, with five councilors opposing it and four supporting it.

Now — with three seats open on the council — the tally of councilors who are not stepping down or facing re-election is a 3-3 tie on the issue. Blanchette, who moved to Florida in July, is not eligible for re-election due to term-limit restrictions. END_OF_DOCUMENT_TOKEN_TO_BE_REPLACED

In Maine, a huge majority (87 percent) of surveyed small business owners support the proposed referendum to raise Maine’s minimum wage to $12 per hour by 2020. The referendum is sponsored by the Maine People’s Alliance and has been endorsed by the Maine Small Business Coalition.

John Costin, who was featured in the report and owns Veneer Services Unlimited in Kennebunk.

“Raising the minimum wage in Maine will help keep our products and services affordable and attainable to a larger customer base. Increased demand for our work will help us continue to create high-paying jobs – reducing unemployment and increasing sales, driving growth throughout the state,” said John Costin, who was featured in the report and owns Veneer Services Unlimited in Kennebunk. END_OF_DOCUMENT_TOKEN_TO_BE_REPLACED

By PATRICIA COHEN APRIL 12, 2015 this is a New York Times article read it in full HERE.

A home health care worker in Durham, N.C.; a McDonald’s cashier in Chicago; a bank teller in New York; an adjunct professor in Maywood, Ill. They are all evidence of an improving economy, because they are working and not among the steadily declining ranks of the unemployed.

Yet these same people also are on public assistance — relying on food stamps, Medicaid or other stretches of the safety net to help cover basic expenses when their paychecks come up short.

And they are not alone. Nearly three-quarters of the people helped by programs geared to the poor are members of a family headed by a worker, according to a new study by the Berkeley Center for Labor Research and Education at the University of California. As a result, taxpayers are providing not only support to the poor but also, in effect, a huge subsidy for employers of low-wage workers, from giants like McDonald’s and Walmart to mom-and-pop businesses.

“This is a hidden cost of low-wage work,” said Ken Jacobs, chairman of the Berkeley center and a co-author of the report.

Taxpayers pick up the difference, he said, between what employers pay and what is required to cover what most Americans consider essential living costs.The report estimates that state and federal governments spend more than $150 billion a year on four key antipoverty programs used by working families: Medicaid, Temporary Assistance for Needy Families, food stamps and the earned-income tax credit, which is specifically aimed at working families. END_OF_DOCUMENT_TOKEN_TO_BE_REPLACED

Advocates say the measure is needed to address rising living costs, while opponents say it will force businesses to shrink staff or move out.

Members of Portland’s Green Independent Committee watched officials struggle with a plan to raise the city’s minimum wage this year and concluded it had a basic flaw: It was far too timid.

With other cities around the country – Seattle, San Francisco and Los Angeles among them – raising the minimum hourly pay to $15, Portland was settling too low by backing $10.10 an hour, said Mako Bates, one of the Green activists who believes that basic fairness requires a more dramatic increase. END_OF_DOCUMENT_TOKEN_TO_BE_REPLACED

Jobs and Justice in Maine
Blog at WordPress.com.